Meet Me In St. Louis 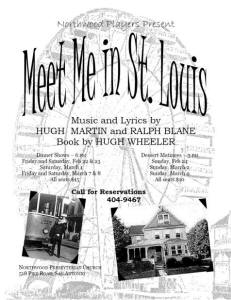 MEET ME IN ST. LOUIS is a rare treasure in the musical theatre, and is based on the heartwarming movie. Join the Smith family at the 1904 World's Fair, and see how their love and respect for each other is tempered with the genuine humor that can only be generated by such a special family. Memorable musical numbers include The Boy Next Door, A Raving Beauty, The Trolley Song, Have Yourself a Merry Little Christmas, Whenever I'm with You and A Day in New York.

DVDs are available. (Rather than guess how many would be needed, Ray is making copies upon request.)

You may request Cast A, Cast B or Both. These are available upon request, no charge, but a donation to the church would be great. $10 for one cast and $14 for both is the suggested donation (but more or less would be fine, too.) Make checks payable to NPC, put St. Louis/Players in the memo line, and drop them off at Diana Brown's house. Please Email me for the address and let me know which cast/casts you would like. I will place the order with Ray and get the DVDs from him, then coordinate delivery to you. Or, if you regularly run into Ray, you can pick them up from him.

Children for the Halloween Scene and the St. Louis Fair Scene:Cameron Cunningham, Corbin Cunningham, Nicholas Futchel, Sam Irizarry, Tyler Kuykendall, Julieta Nelson, Anabelle O’Brien, Jack Sadler, and anyone else I may have neglected to mention who auditioned or who expressed interest!